The US is seen as being the world’s superpower. It is also regarded as the ‘land of the free’ and a country that is progressive in its way of thinking. With that being the case, it’s perhaps surprising that the country, and individual states, still seem intent on leaving online gambling as a crime. However, are there any benefits of legalized casinos?

States raise concerns that online gambling may lead to an increase in gambling addiction or it may, in some way, start to erode the moral fabric of the country. The thing is, states such as New Jersey, Michigan, and Delaware have already proven that this is nonsense. They have demonstrated the benefits that online gambling can bring and they are reaping the rewards.

We’re going to look at just how much money the US is leaving on the table, and also consider how another country may have got it right. 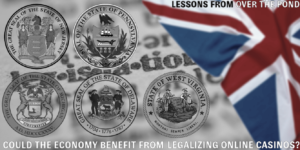 What is each state leaving on the table?

Research has been carried out to examine the potential revenue that states are missing out on by not legalizing iGaming. As it stands there are only a handful of states that allows for the likes of interactive table games and online slots. These are:

When you look at how these states have embraced the iGaming industry and how they’ve been performing. It’s perfectly probable that other states are missing out on more than $6 billion in revenue every single year. Now, you don’t need us to tell you. But $6 billion is not just loose change. When you stop and consider what this money could be used for and what it could fund, leaving it there on the table just seems ludicrous.

When looking at the potential revenue that could be raised, research has looked at the 42 states that already allow land-based casinos or online sports betting. The revenue that could be generated from these 42 states could quite easily top $30 billion. Of course, exactly how much each state could benefit would depend upon the level of tax that would be charged. But when you take 20% as an average, the benefits are huge.

Again, you only need to take a look at the six states that already allow iGaming to realize that it just works. Collectively, over the last year, these states have benefited by around $970 million in additional tax revenue.

There are plenty of people who will defend states that refuse to budge on the issue of iGaming. They will maintain that their states are progressive and, almost, liberal as they have legalized online sports betting. While this may be a welcomed first step, the benefits brought just aren’t comparable in terms of tax revenue.

The reality is that sports betting generates the least profit for online operators. Operating to such slim margins, there are ample times when operators actually lose out and fail to profit. This means that it can’t hope to bring in the tax revenue that iGaming does.

To put things into perspective, in 2021 the 30+ states that allow online sports betting managed to bring in around $560 million in taxes. That may sound impressive, but stop and consider that’s $410 million less than what just six states brought in from iGaming. That certainly paints an extremely clear picture.

To see the potential that iGaming has to offer, it’s with taking a look at the UK and considering how this is managed there. Before we take a full look it’s important to remember that the US has a population 40 times larger than the UK. It’s also important to know that UK citizens don’t pay taxes on gambling wins so tax and other revenue are coming just from the operators.

The UK has allowed the iGaming sector to flourish and this has led to the creation of some 50,000 jobs. However, when you consider that UK citizens are also taking on roles in countries such as Malta and Gibraltar, this number doubles. That’s a substantial amount of income tax being generated alone, and that’s before we consider the operators themselves.

How the UK economy benefits from legalized casinos

For the year 2020-2021, gambling brought in almost £3 billion in taxes. This combines the amounts from online and land-based casinos, but figures suggest that 38% of that comes from online. That’s an impressive figure and one that the US could easily replicate on a much bigger scale.

The UK seems to have got it right when it comes to regulating the iGaming sector. While some operators left the UK scene when the UK Gambling Commission (UKGC) was given more powers back in 2015. Those that have remained have grown and flourished.

The UKGC ensures that online casinos operate fairly. But also responsibly. This means that there have to be steps in place to minimise the risks of problem gambling and that casinos must be audited and shown to be fair. Getting this level of regulation, and trust, right in the US would hopefully open up more states to the possibility of legalizing online casinos.

The UK has demonstrated how successful the iGaming industry can be and has highlighted the tax benefits that it brings. There are already six US states showing that the same can be done in this country if only those in charge will embrace the idea. As the likes of New Jersey and Delaware continue to flourish. You can only wonder how long it will take for outer states to open their eyes and reap the rewards themselves.